More tips from the masters: On POV, character & vocabulary

As I near the end of my Write a YA Novel in 9 Months class led by authors Jonathan Maberry and Marie Lamba, I thought I’d share you with what I’ve learned along the way.

Here is part 2 of techniques and tips I’ve learned on writing for the YA or MG market.

Which POV?
1st person can be limiting. It’s a challenge to not break the one character’s POV. With 1st person you must remain in the same voice throughout the story.  Check to make sure that only the thoughts of your MC are delivered. 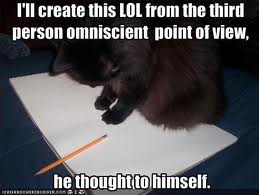 There are benefits to writing YA/MG in 1st person. It brings us directly close to the character, and we all know that kids are self-involved. Second, you can create internal exposition which allows for us to discover what’s going on beneath the MC. Third, it keeps us in suspense as we can’t see all that is going on.

Tip: Use dialogue scenes to give us other character’s POV without breaking from 1st person voice.

Writing in 3rd person can also be limiting. It doesn’t present the opportunity to give us all of the MC’s thoughts. The benefits are that you can hold back secrets and we can see the story from different angles. It can create suspense as we can see other parallel events happening that the MC is not aware of.

Tip: Pull off books from your book shelf and see how characters are introduced. Does it work for you? Copy what that author did.

Exercise: Write a passage where you introduce a character.

On Creating Character
Don’t name two characters starting with same first letter. For example,  David, and Deena. Or Jack and Jill. “Jack and Jill ran up the hill to kill the zombie.” We laugh instead of feeling scared for our characters because their names are so silly.

And please don’t use any of these names: Fred, Ted, Ed. “Howdy,”  Fred said. “Howdy yourself,” Ted said.” You get the issue here.

Have the MC describe how he sees or feels about other characters. In doing so it reveals his own character.

Show us character in the details the MC sees. The hardness of a chair beneath him, how he feels about an object, a photo the MC carries around, or the smell that reminds him of his dog back home, etc.

Stay away from clichés such as labeling a character a bully. Go deeper than that.

Exercise: Write down your major and minor characters then list how they would describe themselves through their own eyes.

Exercise: Describe something from your MC’s perspective.

Write smart. Don’t dumb down the language for kids. Kids read up.

Make sure your language is appropriate for the age. Try not to write “trendy” language. For example: “That’s fat. Cool. Rad.” It could make your book outdated later.

Exercise: Revive memories of being the age of your YA characters. Draw a picture of the neighborhood you grew up in, pin pointing details. Remember what you saw, what you felt, and how you reacted to events there.

Tip: Take a scene and strip out all words but the dialogue to see how your character’s talk. This reveals the beat of character’s words and speech. Then flow it through your book.

Write a YA Novel in 9 Months: Tips from the masters

As I near the end of my Write a YA Novel in 9 Months class led by authors Jonathan Maberry and Marie Lamba, I thought I’d share you with what I’ve learned along the way. I’ve met a great bunch of writers across genres in this class and I am happy to report I finished my book in 7 months!

Here is part 1 of techniques and tips I’ve learned
on writing for the YA or MG market. 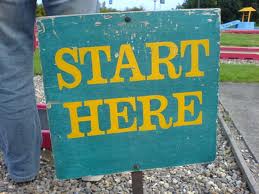 Getting started. Before you write…

Recent trends in writing for YA/MG audience
MG horror is hot now, especially 2-4 books deals in a series running about 40K words each. Think Neil Gaiman’s The Graveyard Book or R.L. Stein books.
Books are released in e-book first, then if good show doing a print run.
YA e-anthologies are hot! Allows kids to read a story in class and review real time vs. a novel. (Adult anthologies more for small press). Check out Campfire Weenies tales on this.
Pitching is on now year round to agents,  no usual slow times in August and after Thanksgiving. Agents continue to seek next best book.

Outline your book
Write a chapter outline with bullet points for each chapter.
Create doc for revision notes so you can fast draft without stopping to edit.
Write a preliminary synopsis of 1-3 pages of prose, single spaced. This is where you talk yourself through the plot. This isn’t the finished synopsis so don’t worry, just for plotting purposes.
Write book logline, that 1 sentence pitch.
TIP: Write 1st and last chapter first. Write to the end of the book so you know direction to go in.

Promo copy
Write back book jacket. Review similar books to get an idea.
Write 1 paragraph description of possible next 2 books in the series.
Create submission list (sub list) of a dozen books that are similar to yours. This is where your book would fit on a bookshelf. Books must be recent successes and in print and in age range to your book. Check out LibraryThing for authors in your genre where you can search by genre/sub genres.

Critique Partner
Find a partner who writes similar to you and once you’ve written the first 25 pages, swap out with each other

Resources:
Check out verlakay.com message boards, a place for children’s writers and illustrators to gather and share information, help each other and have fun while learning the business of writing and illustrating for children.

Challenge yourself: write in a different genre 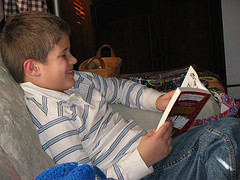 Okay, this was a holiday week and that meant very limited writing time with my 8 year old home.  It was also the week I decided to challenge myself (and I don’t mean finding new ways to protect my stomach muscles when “Play with me mommy” precedes a full-on launched tackle by an 80 lb. boy – see him there —>.)

No, it was the week I took a risk and put aside my new suspense novel to write middle grade. And not just write a children’s book at whim, but take a class on writing a Young Adult Novel in 9 Months with Jonathan Maberry and Marie Lamba. A class with homework, deadlines, and peers to be accountable to with my writing and theirs. (classmates, I swear I will review your work this week and upload mine!)

Write YA? I knew nothing about YA. Just who are these YA’s anyways? My son is short a few years. What angst does a 12 year old boy have? What are his thoughts, his fears, and his random thoughts?

I wasn’t sure but damned if I wouldn’t find out. I soon found myself gorging on some good stuff (The Lightning Thief, The Youngest Templar, The Magnificent 12, The Magic Thief) and some not so favorite stuff (Spyderwick Chronicles, Lemony Snicket) and was like WOW – I want to be 12 again (maybe) and a boy (a former therapist pointed that out already).

I scrambled to come up with a book idea and quickly became entranced with creating my plot, chapter outline, other worlds, characters….umm…but at some point I knew I would actually have to start writing in that 12 year old boy’s voice.

But wait, again…. What POV do these books I like have? I had only written before in third  person. I quickly found out that first person POV for YA/MG has a distinct advantage. Why? It’s more personal and about the main character (and I sure know that with kids it’s all about them).  Not sure what age that ends but I think it has something to do with becoming a parent.

I realized I liked certain books because they were written in the first person POV and drew me in right away. I was them. I was in their head, their world. (Oh, to be 12 again…and then skip 13-18).

I had found something new. Something I have fun writing. And my son is eating it up. And if writing isn’t fun AND challenging, why do it?

Are you challenging yourself to write something new you never did before?

What’s your new beginning? And so I began….

I was 12 the summer that lightning stole my best friend. Lightning. Pretty amazing stuff, you say, right? Sure, if you’re from this world and don’t know any better like everyone else. But not me.