What I learned from writing my first novel

What I learned from writing my first novel

To put words on paper I had to set the alarm for 4:30AM and write in the cold and dark. Some days I didn’t feel like it. Those empty pages stared at me. But like any job some days you don’t feel like going to that either. I got my best writing done on the days I forced myself to write.

Face my fear of dialogue and get over it.
Once I did that I realized dialogue is fun! It brings your characters to life and gives them their own flavor. This was especially fun with secondary characters as I could reveal things about my MC through their banter with them.

Stop editing as I write.
Once I overcame that urge, my writing really took off as I set my course to the end. Then I allowed myself to go back and edit. Fast draft is the way to go.

Hurry up to slow down.
While I should rush ahead and keep writing, when it’s finished I actually have to slow down. I couldn’t rush it out the door. I found myself spending 6 months to edit it, use a professional developmental editor on some sections, research agents, formulate a query letter and synopsis.  There is more work when you are done.

Get the hell outta here.
I found whenever I got stuck I only had to go for a walk to figure it out. In removing myself from my desk it de-cluttered my mind and the problem worked itself out. Every time. Stephen King does the exact same thing. He talks about it in his book On Writing.

Go where I never went before.
I discovered something I never knew about myself. I like writing about taboo things. I exalted in bringing my characters to a dark edge and then saving them, from themselves or someone else. I feasted on crossing the dark side; murder, gore, abuse, torture. It flowed from me like a river on fire. I know I am working out my own demons as my characters are too. And no harm came to anyone (real that is!).

Feeds into my need to be alone.

It occurred to me that writing is a very solitary place. As a only child who grew up on a mountain and roamed the woods for fun, I like to be alone. And so as a writer you write for weeks and months, every day. No one reads it. No one suffers along with you. It is a desperate, joyful, lonely, exuberant place to be. Alone with yourself. You have to push away those thoughts of “Will anyone ever read this? Love it as much as me? Want to publish it?”

Discover why I write.
I realized it’s not for money or fame (someday would be nice!). Not to follow any trends. Not to please anyone in particular. I was writing for ME. I was telling the stories that inspired ME, and no one else. It was the one thing I owned, and no one else (it’s perfect for an only child who doesn’t like to share). So first, write for yourself. Only then can your unique voice shine through.

Found a new addiction.
Once I got deep into my book I breathed my characters. I hurt for them. I championed for them. They became real to me. I heard songs that made me think of them and I would play them over and over to feel close to them. Near the end of my book, I slowed my writing down. I actually DIDN’T want it to end as then my characters would be gone. They would no longer live through me.

I am a writer.

More Hot Tips from the Philly Writer’s Conf: On Character

Still lots of good stuff to report on from the Philadelphia Writer’s Conference June 3-5!

More notes on character – presented by Gregory Frost, Author of ShadowBridge and many more works. 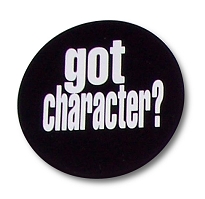 Grab readers in your first para with the MC’s voice. Create image of MC in our mind from the get-go.

Don’t rely heavy on character description. We need their voice to build character in our mind.

Don’t give reader everything in building character.

Present events and let them pass before reader’s eyes so they can judge what is going on.

Characters must show reactions to situations, not reactions by the author.

Don’t lead reader by the hand. Let them find out.

TIP: Write first draft of few pages to explore characters. Start out intuitively to write these first pages of your novel. Stop so far in (20+ pages). If it seems to be working then stop and outline entire book.

Element to characters:
Desire. All that happens in the novel occurs because of desire.
MC wants something bad enough and will do anything to get it. Your MC must yearn for something. Show us early on in the book what your MC wants, yearns for.
Not sure who’s story it is? Pick the person who suffers the most, hurts the most. Make it that person.
Decide who tells the story best.

Exercise to do to create a detailed character:
Choose a container, wallet, jewelry box, laundry basket, any etc. and make a list of what your character(s) keeps in this place. Choose the right items that ring true for each character.  Make it detailed to create a unique an identity from this list. Can you find elements for narrative thread from the list?  (ie. Theater stubs, what happened before/during or after). If so, add them in to book.